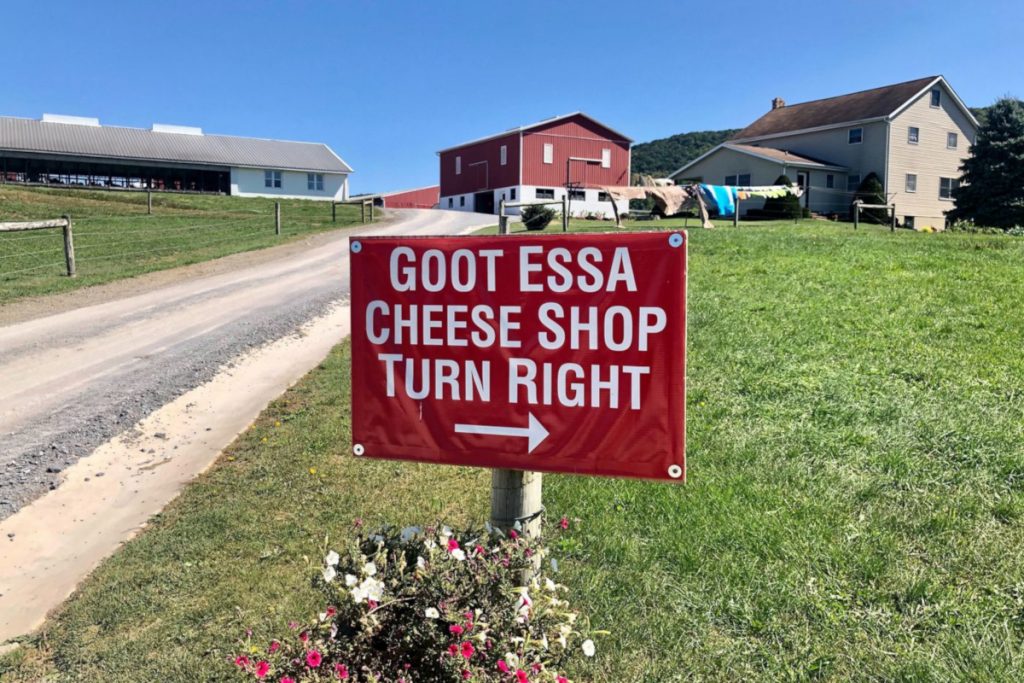 HOWARD, Pa. — A ride through the rolling country roads of lush green Centre County farmland can feel about as far from the urban bustle of Philly’s restaurant rows as Pennsylvania can get.

And that was especially true as we climbed the gravel drive past the barns and farmhouse fringed with laundry lines fluttering in the fall breeze and we pulled up to the cheese house at Goot Essa. This Amish farmstead cheesemaker, (the name in Pennsylvania Dutch means “good eating”), is owned by the family of John and AnnaMary Esh, who strive to follow their community’s religious traditions and assure it is as self-sustainable as possible.

“This is an evolving process for us, but the goal is to be off the electrical grid,” says John, 54, who warmly welcomed us for a tour. 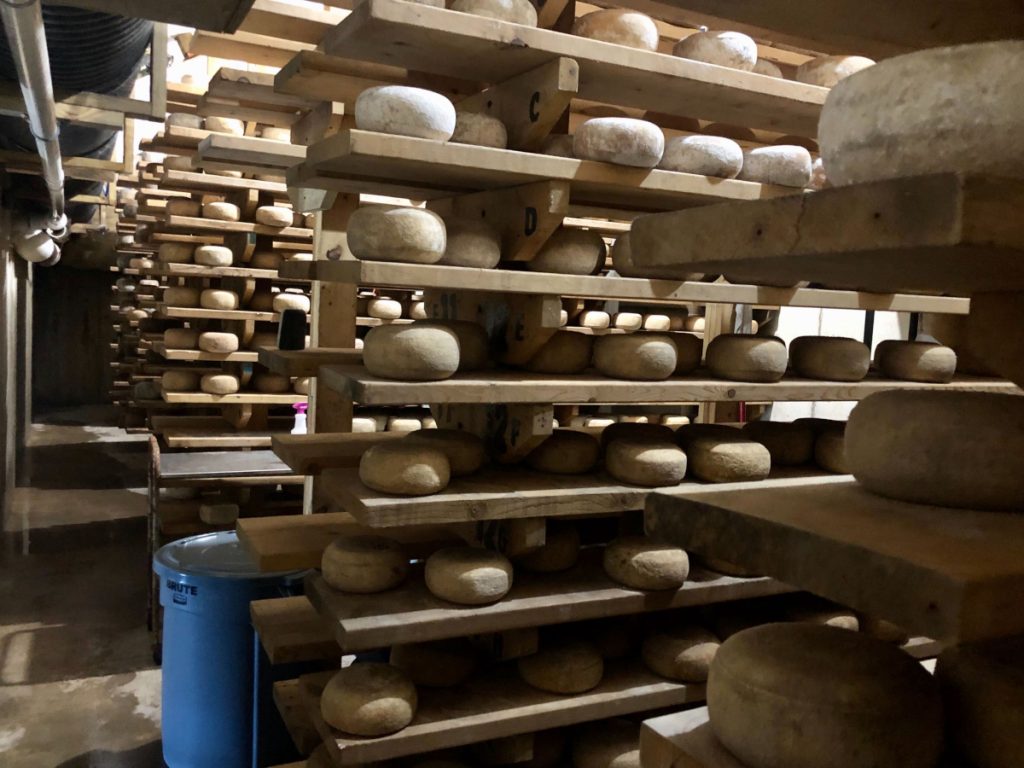 Solar panels power the pasteurizers that heat milk from the farm’s 70 Holsteins before it is hand-paddled, separated, and shaped. Propane illuminates lanterns in the tasting room where orders are wrapped with ribbons and packed for gift box shipping. A diesel engine chills the three aging rooms that are carved into the limestone hill below, where a 65-foot-long subterranean cave holds up to 10,000 pounds of aging dairy treasures like Felsa Yehr, a masterful Manchego-style wheel whose name means “rock aged cheese.”

The COVID-19 catastrophe, however, has provided yet another reminder of how intricately our food systems are linked, where even some of the seemingly isolated artisan producers are vulnerable to the ripple effects of a still reeling restaurant industry.

“This (crisis) has been a big deal for us,” said Esh, who is notable among Amish cheesemakers for his strong presence on cheeseboards in fine dining restaurants in Philadelphia and beyond. That was a plus in pre-pandemic times. But Goot Essa instantly lost 50% of its business as orders went from an average of 100 per week to 15 after restaurants shut down in March. 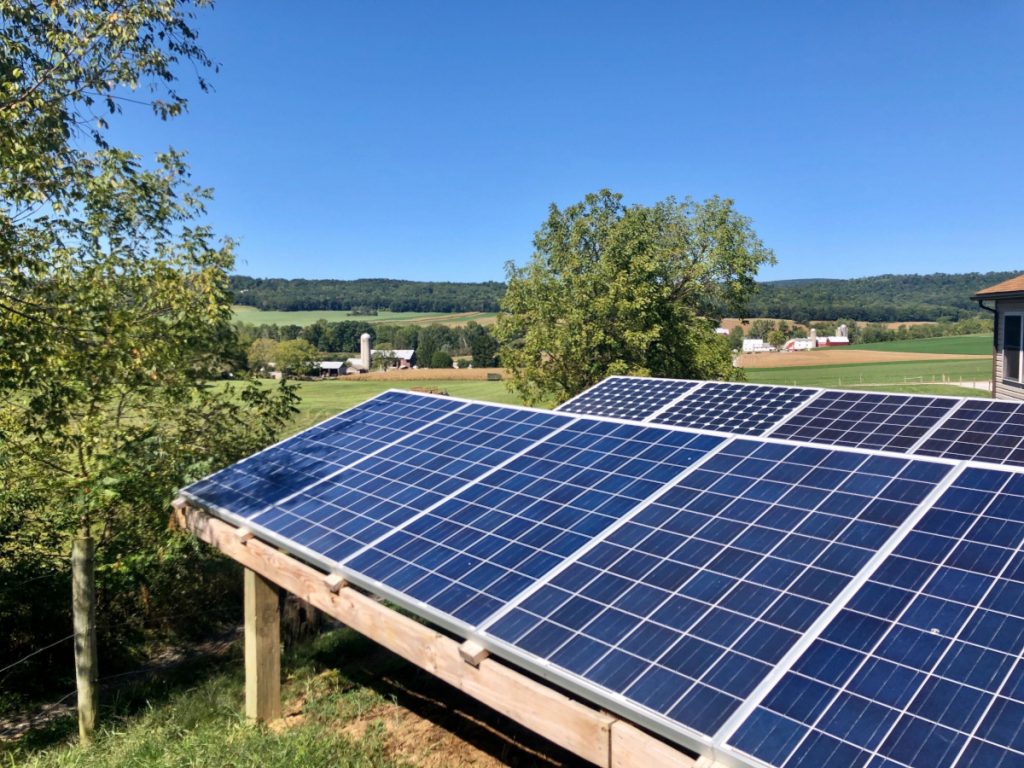 “Most restaurants are not back, or if they are back, (at) much lower volume,” says Goot Essa office manager Carolyn Steffen.

It’s not for lack of enthusiasm. Nicholas Elmi of Laurel, one of several chefs on East Passyunk Avenue who has featured Goot Essa’s cheese, says that Felsa Yehr, which is made with sheep’s milk and aged for a year, “is close to if not better than most Manchegos that we’ve had. It’s very bright and floral with a lot of nuance, with an acidity like lemon rind and a kind of coriander smell.”

Elmi gushes that Goot Essa’s cow’s milk Gruyère-style, Der Alpen Kase, “basically tastes like brown butter and hazelnuts. And although it’s a harder alpine cheese, it smooths out quickly once you bite, then coats your lips, and encompasses your palate.” 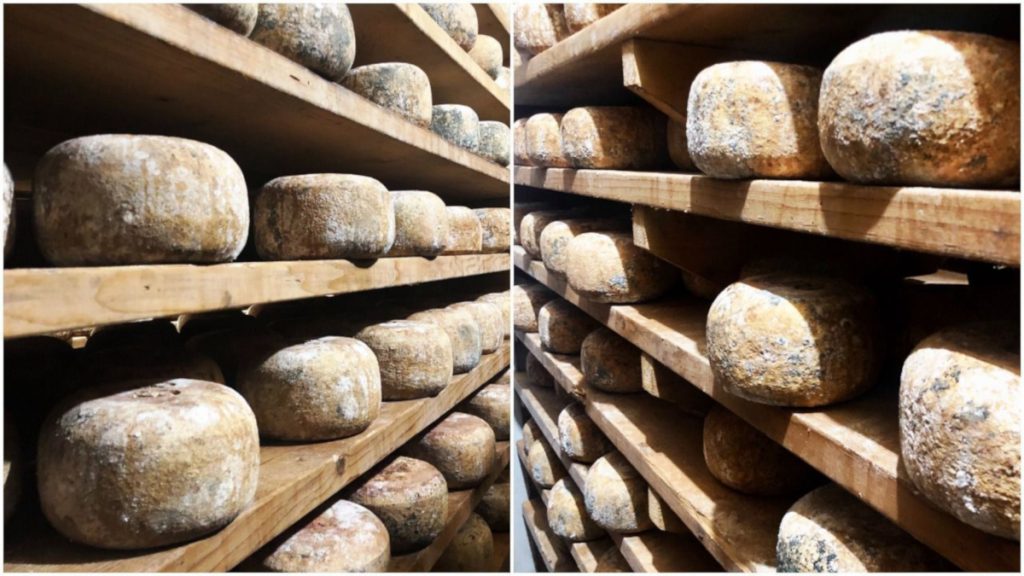 Laurel finally reopened for limited indoor and outdoor dining earlier this month but the usual cheese course got axed for COVID-era tasting menu brevity: “We’re trying to keep everyone here at or under two hours,” Elmi says.

Goot Essa is hardly alone in its struggles, says Kerry Kaylegian, an associate professor at Penn State University who started the cheese contest at the Pennsylvania Farm Show and sits on the board of the American Cheese Society. She estimates there are as many as 80 artisan cheesemakers in Pennsylvania, about 20 to 30 of them small farmstead operations that make cheese from their own milk. And this crisis has challenged them all.

“We’re seeing a lot of people struggling and smaller (cheesemakers) going under,” she said. “If you’re a small business without a big buffer and losing half your business overnight, it’s hard to recover.”

This is not the first time the Esh family has faced an existential challenge to its farm. In fact, that’s the reason they began making cheese nearly 20 years ago, as the economies of scale began to threaten small family dairies. 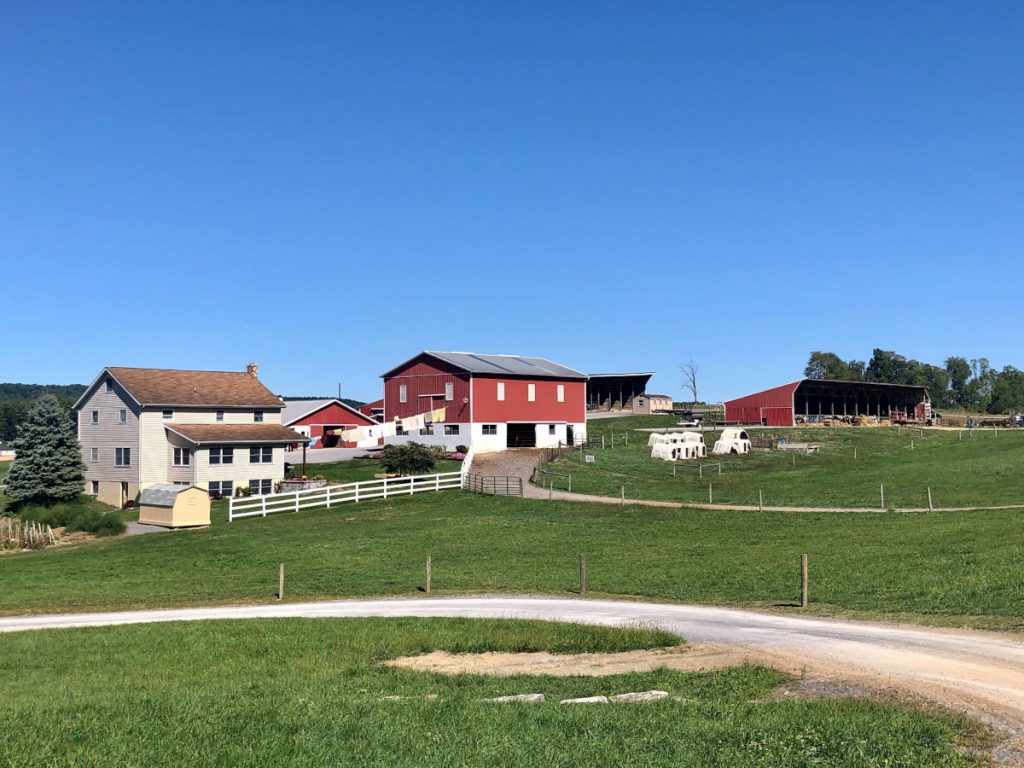 “We were looking to position ourselves in a way to stay on this farm and support our family,” said Esh, who began there as a dairy in 1991, then began making cheese as a value-added product for their milk in 2001. They now have nine children and six grandkids, many of whom still work on the farm. “We’ve been blessed.”

Goot Essa’s operation has grown to an annual production of up to 40,000 pounds of cheese and employs eight non-family employees. It also supports five other Amish farms that provide sheep and goat milk for some of the 19 varieties that cheesemakers Fannie Mae Glick and Lydia Stoltzfus make by hand. Their version of Pecorino called Butta Schaf Kase is extraordinary after 16 months of age, with intensely buttery, nutty flavors, a fissure-like crumble when sliced, and a bite of cellar age on the finish that recalls its sheep’s milk tang.

That sprawling cellar, built in 2014, is one of three aging rooms at Goot Essa. It has been a key to elevating the farm’s cheeses to the next level of complexity, which only time racked on a spruce wood shelf in a 55-degree room with high humidity can achieve. Stepping down into its dank, vaulted space is a multi-sensory experience: The lactic tang and cellar must tickle your nose, and hundreds of cheese wheels cast concentric shadows across the brightly lit room in either direction. This is where Goot Essa’s old-school magic happens.

Goot Essa produces a broad selection of well-made cheeses. There are bloomy rind softies in three kinds of milk (cow, sheep, and goat; all of which could benefit from more ripening), a funky and pungent blue (Der Edel Bleu Kase, perfect on burgers), excellent cheddars and a tangy Old German made off-site by Amish dairyman Israel Kinsinger of Oak Shade Cheese (then aged further at Goot Essa). 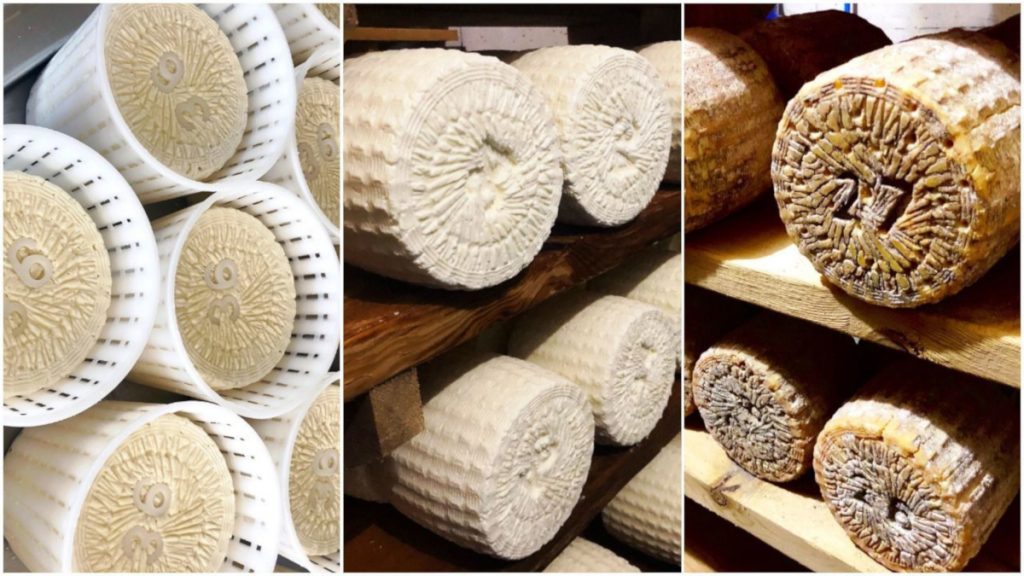 John Esh built the business, in part, by his willingness to hire people to do the modern tasks he was uncomfortable doing himself. He typically travels by horse and buggy, he said, as the phone rang and rang somewhere behind us (“It goes to voicemail!” he shrugged). But hiring a driver to take him on sales calls to restaurants and wineries in New York and Pennsylvania was a major step in gaining both exposure and inspiration for some of the European cheese styles that he’s refined with the help of consultant Bob Patton.

“We get cold-calls from random people every week, but we’ve never had any Amish cheesemakers coming through,” says Laurel’s Elmi, recalling his first encounter with Esh about five years ago. “I remember thinking, ‘I don’t want to do this right now.’ But he was so nice. And then he started feeding me, Eddie Konrad (then-chef de cuisine) and two line cooks, and we were were like, ‘Holy s—! Let’s take a coffee break!”

High Street on Market, Townsend, Vetri, Rouge, and Tria were among the other Philly restaurants charmed enough to serve Goot Essa’s cheese. But now the creamery must find ways to compensate for the loss of its restaurant base, and Esh has turned to another staple of modern commerce to help his cause: the internet.

“Hiring a website manager for online sales has been important,” says Esh, who does not use computers.

The timing couldn’t have been better. The website they launched last winter is now responsible for 50% of their retail business, says Steffen, throwing a small lifeline until the boost of the holiday season arrives when gift basket business — which also offer Amish honeys, preserves, mustards, and fudge — typically requires them to double staff.

“We have seen increased retail traffic, but not enough to replace the restaurants,” says Steffen. “Having the site has been better than not having one.”

But in this corner of Pennsylvania, the old ways are still revered. More locals have been coming directly to the farm to buy cheese in person. Older customers still place their orders by phone, Steffen says. And then there is their annual post office blast of colorful paper catalogs sent to 1,500 customers, its painted cover of an Amish family riding a horse-drawn sled across the picturesque farmland opening up to 20 pages of cave-aged dairy beauties. Will it be the boost Goot Essa needs?

“We shall see,” says Steffen. 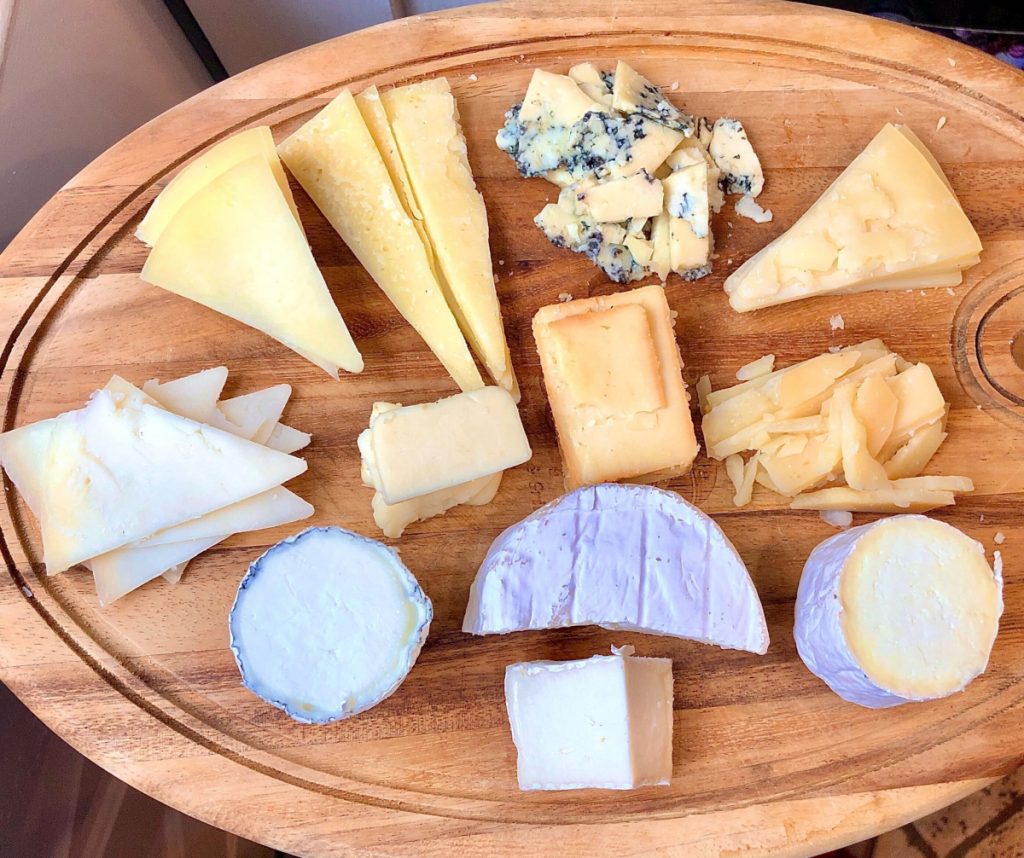